The purpose of this award is to recognize students each year for their contributions and leadership in forensics and speech activities.

Before the current rendition of forensics at Michigan State, many other teams have existed and competed at a national level. In 2013, then-freshman Hannah Stoloff reestablished what was a defunct team at MSU. She put together a small team of former MIFA competitors and they learned together the different climate of college forensics. Her efforts helped to establish the team within the university’s student organization landscape and the Michigan Intercollegiate Speech League community at large.

Hannah worked diligently to gain funding to support team functions, recruit team members, organize team meetings, practices, and tournament registration and attendance. Hannah also worked with fellow teammates and outside institutions to assure the success of the team. As one of the first leaders of forensics at Michigan State, Hannah extended her passion for speech beyond the competition room, and made sure she brought others along for the ride.

Although the team returned to its defunct status in the fall of 2016 before being reborn as Spartan Speech in 2017, Hannah’s work within the East Lansing speech community has not been forgotten. Today, you can find Hannah at the University of Michigan as she works towards her masters in library science. She still remains an active force in Michigan forensics, coaching at her alma mater Walled Lake Western and assisting with the annual Spartanvitational.

Who can be nominated?

Any student who meets the following eligibility criteria:

Students who are nominated should possess the following qualities:

How to nominate someone

Students, coaches, parents, and peers can nominate qualified students by writing a short (250 words max) narrative detailing why the nominated students deserves the award based on his/her contributions.

Neither anonymous nominations nor nominations without an accompanying narrative will be accepted. Within the narrative, the nominee’s name should be omitted, substituting their name for “this person” or other non-revealing language of such nature.

This award is intended as an acknowledgment of the leadership and passion that students have dedicated to their respective programs and peers. Members of Spartan Speech will then review the nominations and make a selection based on the quality of the accompanying narratives.

Award recipients shall receive a trophy during the awards ceremony at Michigan State as well as a letter and plaque mailed to his/her building principal following the tournament.

Recipients may not be named a Hannah Stoloff Legacy Award Recipient in two consecutive years.

For the 2021 tournament, the Stoloff Legacy Award recipient will receive: 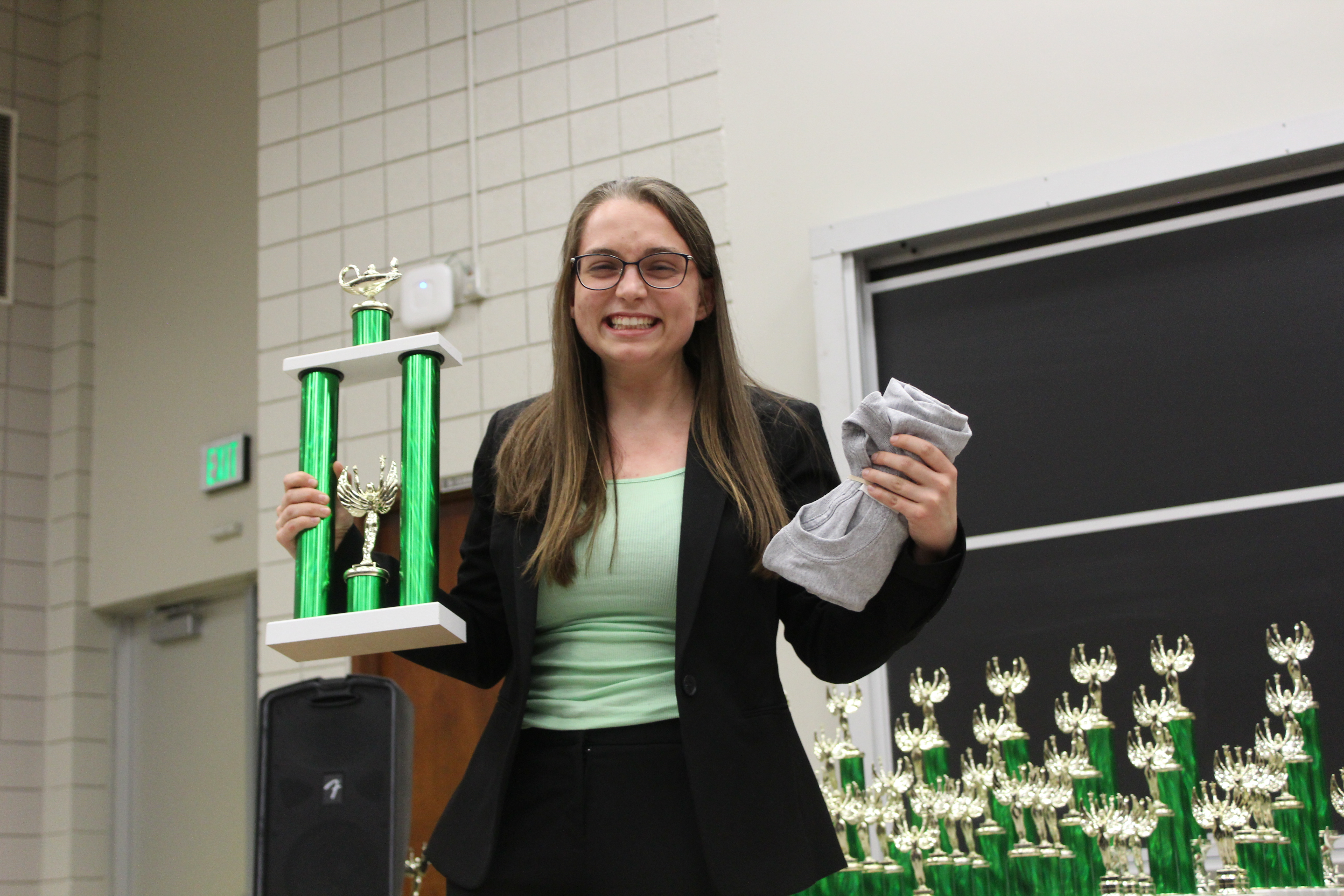 "I have never met a more genuine, hard working, team player. Macy is always eager to help, whether it is reading a teammates speech or assisting with tournament prep. Macy works behind the scenes to make sure everything runs smoothly even if she isn’t specifically told to do so. Without Macy on the team, it might fall apart in mere minutes. It’s impressive that Macy is a team captain, right hand to the head coach, an AP student, an athlete, a babysitter and still has time for her own piece–and she does it all with a smile on her face the whole time. Macy uses her forensics skills outside of the activity by participating in a debate/politics class and bringing important topics to the table." - Anonymous.

Submissions are now closed for the 2021 tournament.

Thank you for interest in our program and the legacy award.

For any additional questions you may have regarding the Hannah Stoloff Legacy Award, you can reach our Historian, Peyton at naragonp@msu.edu.